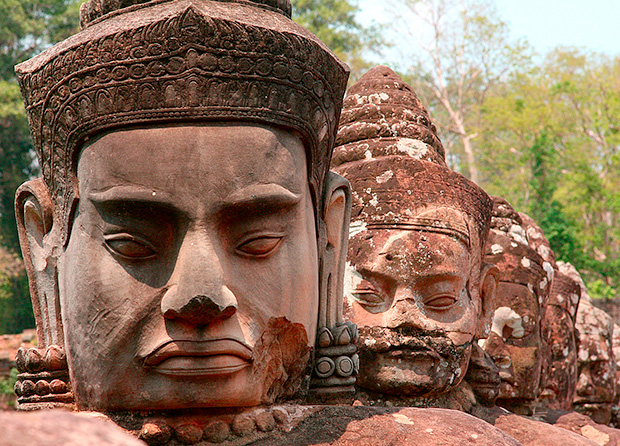 In the late winter of 2015, we enjoyed a fascinating travel experience in southeast Asia, accompanied by our daughter Joanna, who had just finished a teaching assignment in Bangkok. The highlight was a visit to the Angkor complex of temples, near Siem Reap, a city in eastern Cambodia. The most famous and biggest temple is Angkor Wat, but it is by no means the only, or the most beautiful. Built by the rulers of the Khmer Empire between the early ninth and the fourteenth centuries, the Angkor structures and their artwork show a deep Hindu, and in some cases Buddhist, influence. The temples have suffered from the ravages of time and strangler-fig trees, as well as the savage Pol Pot regime in the aftermath of the Vietnam War. In recent years, many of the temples have been reconstructed or restored and land-mines cleared in an international effort. But the new pressure of millions of tourists annually is a mixed blessing, bringing Cambodia much-needed tourist dollars while increasing environmental pressure on the sites. Through this presentation, we will share images of the Khmer legacy of Angkor and modern Siem Reap.