Whenever I am asked about where to photograph in Nova Scotia I always point visitors to the “Photographer’s Guide to Nova Scotia“, created by two friends of mine. Blair is a videographer and Carolyn is a photographer. Now they have produced a TV series about Nova Scotia. If you have an Eastlink account you can watch the series on Eastlink Community TV (channel 610).

“Experience Nova Scotia” will air beginning Sunday, January 19 at 1:30pm on Eastlink Community TV with repeats on Tues. and Thurs. at 1:30pm for length of the series of 6 weeks, then the whole series repeats again for another 6 weeks. EastLink Community TV serves 330,000 TV subscribers in nine provinces.

On August 5, 2018, a message was posted on the photoguild.ns.ca and automatically sent to the executive. The following is a portion of that message:

“I’ve come across a series of scrapbooks that my father put together in the 1980s and 90s, of M. Kumar-Misir’s Chronicle Herald columns. Would they be of interest to the Guild? I’d be pleased to send them…they contain a lot on the history of photography, technical information and general reference.
Thank you. Cora Nelson”

Mervyn contacted Cora Nelson who was visiting from the United States. Arrangements were made to meet, which resulted in six (6) well-documented scrapbooks dating from 1979 to 1986.

The first scrapbook features articles from February 2, 1979 to January 4, 1980 written by Peter N. Parsons, Chronicle Herald photographer. The remaining articles in this scrapbook and the following five (5) scrapbooks are written by Mervyn Kumar-Misir. These books date from January 23, 1981 to January 24, 1986.

Mervyn was the first photographer in Nova Scotia to shoot colour film for weddings. One of his most interesting images, which is also a double-exposure, was published on March 27, 1981 and features the CN Tower in Toronto with his signature “moon”. These articles are very informative, historic, and just plain fun to read.

Kudos to Mr. Nelson for preserving them and to Cora Nelson for passing them on to Mervyn. 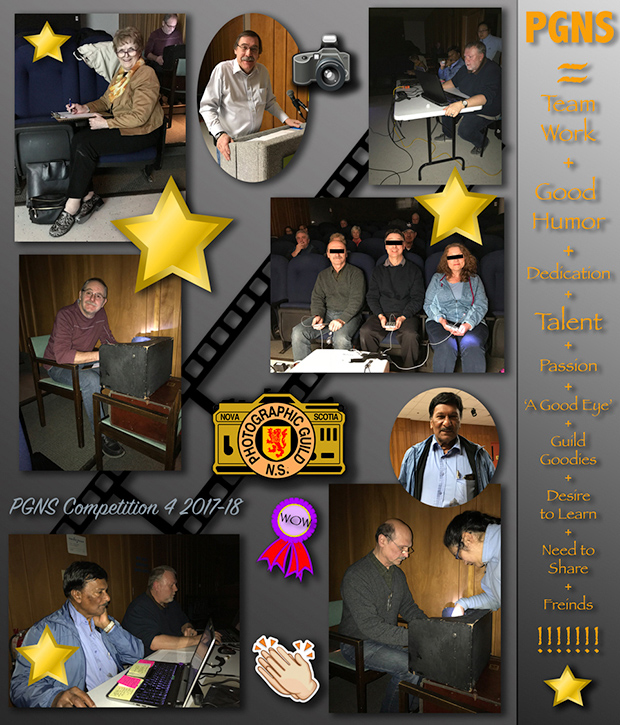 Thought I would share this collage I made with cell phone photos to show you what goes into a competition evening at the Guild…
It takes a team….one with a sense of humour by times!
And this team is GREAT….!!!!